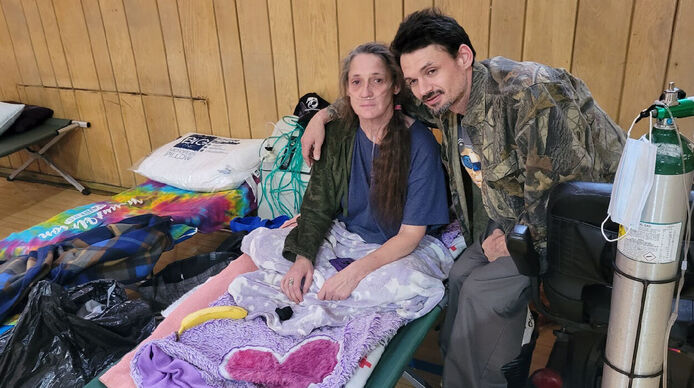 Connie Samples and Bradley McKinney were among residents who spent the night inside the YWCA on cots after their building was vandalized and flooded. Photography via Lori Steineck, The Canton Repository

Around 1 a.m. Tuesday morning, a man broke into Canton YWCA's Gateway House II and tore down the sprinkler system, causing the entire building to flood and damaging the electrical system.

More than 50 residents living in the transitional housing building in downtown Canton were immediately evacuated to the YWCA gymnasium where they spent the rest of the night sleeping on cots and anxiously waiting to hear what would happen next.

Located at 626 Walnut Avenue NE, Gateway House II is part of YWCA's permanent supportive housing program and is specifically designed to provide disabled, chronically homeless individuals and families with a place to call home. As clean-up is underway and the YWCA awaits assessment from the insurance company, it is clear the four-story building requires significant restoration and is unsafe for residency.

Thanks to the generosity of Stark Community Foundation, Sisters of Charity Foundation of Canton, Hoover Foundation and United Way of Greater Stark County, the majority of residents have been temporarily relocated to a local hotel. The cost for two weeks of hotel stays and food alone is approximately $45,000. However, the restoration work could take up to 4 weeks and until then, residents will need to live in alternative housing.

While residents had an opportunity to retrieve some of their belongings from their apartments, many personal items were destroyed. Community partners are working together to help replace their clothing, furniture and appliances.

Update as of Friday, December 3

Reconstruction work began on Monday at Canton YWCA's Gateway House II, following a flood on November 16 that damaged the electrical system and displaced 52 residents living in the transitional housing building in downtown Canton. Since the critical incident, the majority of residents have been temporarily relocated to a local hotel, which costs approximately $22,000 per week.

Thanks to our community's generous donations and support, three weeks of hotel costs have been covered. The YWCA's goal is to have residents return to their homes by Christmas, and until then, residents will need to continue living in alternative housing until restoration work is complete.

In addition to ensuring Gateway residents have stable housing, community partners are working together to meet their other needs: The hotel and Refuge of Hope are providing daily meals. Goodwill Industries is offering vouchers to help replace damaged clothing. The YWCA is providing residents with a weekly laundry allowance and a 30-day bus pass.

How You Can Help

While community partners are coming together to respond to this emergency, there is still a need for more support. You can make an immediate impact on the lives of the residents of Gateway House II who have been displaced during the holiday season.

If you would like to join Stark Community Foundation in supporting these residents, here's how you can help:

All donations made to Stark Community Foundation’s Immediate Impact Alert Fund will be awarded to the Canton YWCA to help its Gateway House II residents.