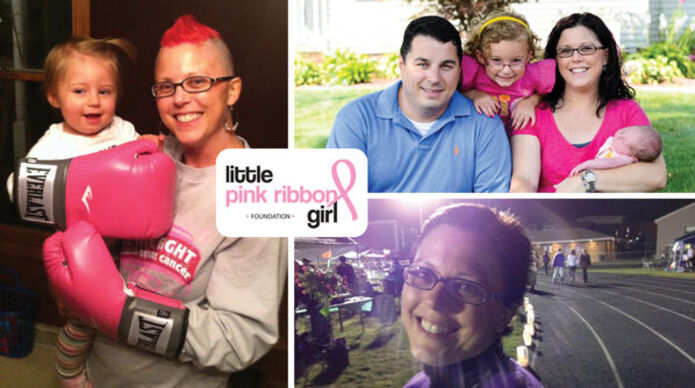 Angie Conley was first diagnosed with breast cancer at the age of 27.

Throughout the years, she never lost hope or allowed cancer to deny her of living life and giving life to two beautiful daughters, Sofie and Hannah. In 2014, at the young age of just 36, Angie lost the good fight.

Soon after, her husband, Dan, established a charitable fund through Stark Community Foundation to honor Angie and her dream – a dream she was working hard to make come true when she passed away from triple-negative stage 4 breast cancer.

After learning about toxic chemicals used in beauty products and their link to cancer, Angie started developing cosmetics using only organicand natural ingredients. She wanted to use the profits from the all-natural line to support women in her community impacted by the financial burden of cancer. While the cosmetic brand never hit shopping shelves, her lasting dream of helping local families did and continues to this day through The Little Pink Ribbon Girl Foundation.

“As a family, we felt the pain of financial hardship that comes along with being sick,” said Dan. “And, when you are fighting for your life, you’ll try just about anything anyone suggests – chiropractic care, acupuncture and other alternative treatments. That’s all out of pocket. Those expenses add up quickly, and unfortunately insurance typically doesn’t cover them.”

While Angie was living, fundraisers were held locally to support the Conley family. As a way of giving back to the community that showed so much support for them, their Foundation provides grants during the holiday season to area families affected by cancer. Holiday grants can be used to buy Christmas gifts, pay rent, purchase groceries – anything that would provide a sense of financial relief.

“If you have a stack of bills and it takes some stress off of you to pay some of those, then we want you to do that,” said Dan. “Or, if you want to use the money to buy gifts for your children, that’s fine too. We want these grants to provide hope and immediate support.”

Christmas was Angie’s favorite time of the year, so it came as no surprise that the family chose to award grants during the holiday season.

Angie and Dan also received a similar grant from the Josette Beddell Memorial Foundation to make their last Christmas as family of four special.

“When you are sick, you try so hard to normalize your life, especially if you have kids,” added Dan. “That grant made our last Christmas really memorable.”

The Foundation began awarding grants in 2015 and since then has provided nearly $10,000 in financial support to 13 families. One family in particular is a single mother whose son has cancer and is devastated by the financial strain caused by cancer. She could hardly talk when she found out they were receiving a holiday grant from The Little Pink Ribbon Girl Foundation. “She was sobbing, fumbling over her words,” recalled Dan. “It really meant a lot to her.”

Recipients who are impacted by cancer, demonstrate a need for financial assistance and live in or around Stark County can be nominated or can apply themselves through an online application at www.littlepinkribbongirl.org.

The Little Pink Ribbon Girl Foundation continues to grow with help from family, friends and the greater Stark County community. In fact, in lieu of Christmas presents each year, members of their extended family donate money to the Foundation. The community also rallied around Angie’s legacy in October at Eat, Drink and Give Hope, a cultivation event that raised more than money. It generated ideas and support for the mission of The Little Pink Ribbon Girl Foundation.

“This was Ang’s idea,” said Dan. “This Foundation – it’s us fulfilling a promise to her. She was our Little Pink Ribbon Girl and wanted more than anything to leave the world a little better than she found it.”