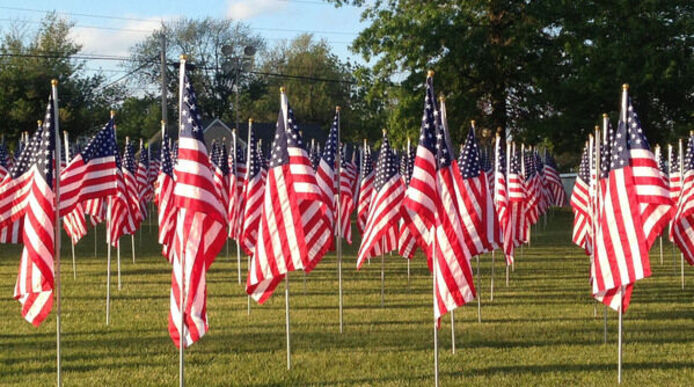 Eleven courageous graduates of Perry High School have given the ultimate sacrifice for our country. Their legacies live on in the countless lives they touched, the Perry Veterans Memorial that displays their faces and through Operation: Flags of Freedom.

Created by Perry Township residents in loving memory of the community’s fallen heroes, Operation: Flags of Freedom promotes patriotism and educates others to honor veterans and to preserve the memories of those who have served.

Steve Toohey created the nonprofit after a conversation with his close friend, Kathy Patron. Kathy is the mother of Sgt. Daniel J. Patron, a 2003 Perry graduate and U.S. Marine who was killed while serving in Afghanistan.

“What can we do to never forget Danny?” Steve recalls Kathy asking during 2012’s Memorial Day Weekend while having lunch near the memorial outside of Perry High School.

From that short, meaningful conversation, Operation: Flags of Freedom was born.

The nonprofit’s first event was Memorial Day Weekend a year later when the lawn of Perry High School was filled with 1,000 3’ x 5’ U.S. flags to remember and honor Perry Township veterans and fallen heroes. Each year since, the celebration has expanded to feature a fleet of military trucks, live music, an adult hero hunt, fireworks and more.

Locally and throughout Ohio, the all-volunteer organization provides American flag displays at more than 50 events throughout the year at parks, schools, churches, businesses, air shows, homecomings, concerts, dedications, funerals and welcome home parties for veterans. Most recently, Operation: Flags of Freedom’s flags were displayed in Cleveland when the United States Navy announced a new warship will be named the USS Cleveland.

There is no cost for the displays, however donations are appreciated.

The money raised in donations alongside sales of American flags provide scholarship support to the Sgt. Daniel J. Patron Memorial Scholarship and the Fallen Heroes Scholarship that are awarded annually to Perry High School students who submit personal essays on what it means to be an American.

In addition to scholarship support, Operation: Flags of Freedom educates others about patriotism and flag etiquette. One offering is the Flag Drop Box at the Perry Veterans Memorial where residents can drop off flags that are worn, ripped or damaged. Flags are then given to local Boy Scout Troops who give the flags a proper retirement ceremony.

“Every city, town, village or community has citizens who are actively serving in the military or are veterans of past wars,” said Steve, who serves as president of Operation: Flags of Freedom. “Let us never forget that they represent what makes America great!”

While Operation: Flags of Freedom continues to grow in programming, it also grows in financial support through its endowment fund at Stark Community Foundation. The income earned each year provides steady support for its mission to honor, preserve, protect and educate.