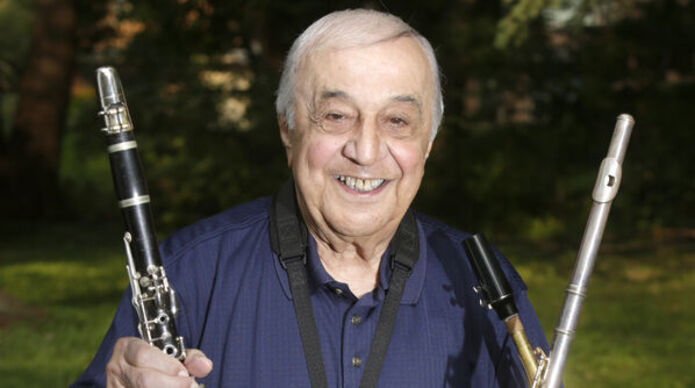 All too often, musical greats and talented artists are honored only after they have passed away. While discussing this topic with a group of friends at Tozzi’s downtown, it sparked an idea in Gail Martino’s mind to honor local talent while they’re still living and performing.

Gail wanted to bring people together to celebrate her friend and talented musician, Jack Halkides, through a laidback “jam” session. The more people she shared this idea with, the more people kept saying – “do something bigger.”

Jack Halkides, a Timken High School graduate and Air Force veteran, is known throughout the community for his jazz and band music. While serving as Chief Deputy for the Stark County Treasurer’s Office, he also played for bands big and small while teaching music lessons. His passion is to teach and support young players of the saxophone, clarinet or flute – his three favorite instruments.

When Gail shared her plans with Jack, he was excited and humbled about the possibility of people gathering together for a night of music and memories. Within weeks, the tribute event fell into place at the Alex D. Krassas Event Center. Personal connections and friendships made the event come to life with catering offers, a cash bar and live music as well as a program about Jack. Tickets were sold for $25, but purely to cover the costs.

Astonishingly, 200 people attended the event honoring the life and musical legacy of the long-time band leader, creating an excess of funds.

“We never wanted to make money off the event,” Gail said. “The event grew out of friendship – it grew out of doing something nice for Jack.”

Jack suggested the event earnings be used to provide an instrument to a student who was musically talented, but couldn’t afford an instrument of their own.

While they loved the idea, Gail and the group who planned the event wanted to find a way to help more than one student and continue Jack’s legacy of supporting and inspiring young talented musicians in perpetuity. They approached Stark Community Foundation about creating a charitable fund in Jack’s name.

While the group was raising additional dollars to create the Jack Halkides Tribute Fund, Jack passed away at the age of 85. Although Jack didn’t get a chance to see the fund come to life, his legacy and inspiration live on.

The Jack Halkides Tribute Fund provides a year’s worth of private music lessons to a 7th or 8th grader from Stark County. A committee comprised of Gail, local musicians, area educators and Jack’s son reviews applications from middle school teachers and selects a recipient to receive lessons from a highly-skilled musician.

“We are so proud of Jack’s career and we wanted to give him a night to shine,” Gail recalled fondly. “The look on his face, how happy he was... We had no idea where this event would take us.”

John Mahon, a Louisville native, one of Jack’s friends – and coincidentally, a member of Elton John’s band – was one of the generous supporters who made the fund a reality. His involvement didn’t stop there. He sent the first recipient of the music scholarship award an encouraging note: “The best advice I can give someone your age is to keep practicing, play in front of people every chance you get, meet other musicians and especially go out of your way to make contacts in the business,” said John. “You must be passionate and able to persevere.”

Jack’s wish was to leave a legacy to help aspiring young musicians. He urged them to “practice, practice, practice.” The Jack Halkides Tribute Fund will do just that – with a little help from his friends.