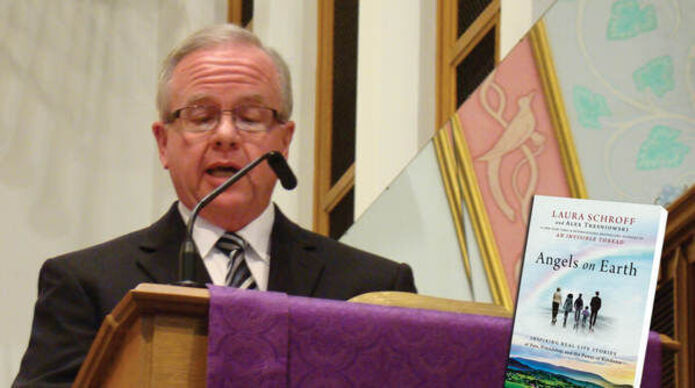 Just a few short months after Jim Kettlewell passed away unexpectedly, his wife, Kathy, came across an email from an author trying to get in touch with Jim.

As it turns out, Jim’s writing was going to be part of a book. His experience with a stranger in a Canton bookstore was to become part of a collection of inspiring, real-life stories of fate, friendship and the power of kindness. It was meant to be a surprise for Kathy and their close circle of family and friends.

“Jim didn’t read in the bookstore, but he did that day,” recalled Kathy. “He had just finished reading An Invisible Thread (by Laura Schroff) and the book touched him. Right after he read this book, he had an encounter with a stranger.”

In the bookstore that day, Jim overheard a man in his twenties pleading with a motel manager over the phone to let him and his daughter stay just one more night even though he couldn’t pay for it. He had just received a paycheck from a new job, but the bank was holding it until the funds cleared. The manager wouldn’t budge on his decision. The young father moved to plan B by calling area homeless shelters to see if they had space available for him and his daughter. Unfortunately, no one would accommodate them.

While describing Jim’s story, Kathy shared, “You’re taught from a young age to not talk to strangers, but Jim sensed a need and acted on it.”

When writing about the encounter, Jim’s mind wandered to thoughts about his father as a giving individual. Jim could hear his father saying, “‘Jim, it’s good to have a little money, because sometimes a little money can fix a big problem.’ And, that’s when I knew that I would help this man.”

Jim drove this stranger, who we now know as Rick, to the closest ATM and handed him a few hundred dollars. Rick expressed that this was way too much money, but Jim knew he and his daughter needed to eat and that they may need the extra cash in the next few days before his check cleared.

Inspired by the book An Invisible Thread, Jim felt compelled to share his story with the author. Surprisingly, Laura Schroff responded by inviting him to be part of her next book, Angels on Earth, a series of uplifting stories about ordinary people making a difference in the lives of others.

Jim and Kathy never spoke about this experience, but Kathy believes it brought Jim peace to do this seemingly small act of kindness for someone who needed it most. That’s just the kind of guy Jim was. Generous. Kind. Caring. Committed.

While Jim originally thought his act was “puny,” he shared with the author that he later realized that what he did was “help someone who was in need. And when you do that, it is never small.”

Although Jim passed away in 2016, his legacy will live on through Angels on Earth and through the Jim and Kathy Kettlewell Tithe and Gift Fund at Stark Community Foundation.

The couple created their donor advised fund in 2014. Using the Biblical teaching of the tithe, the Kettlewells were inspired to establish a permanent endowment fund to make gifts to their church and other worthy causes that are important to their family.

As members of Christ Presbyterian Church in downtown Canton for more than 25 years, they provide grants to their church to support its ongoing ministry, music and camp programs. Jim and Kathy were both elders in the Church and Kathy sings in the choir. Jim also supported entrepreneurship initiatives in the Stark County community through his work as a volunteer for SCORE, an organization comprised of retired and active business professionals who are dedicated to helping entrepreneurs develop and execute new business plans.

Giving was at the center of their faith and at the heart of their generosity.

“Jim was frugal, but generous, if that makes any sense,” said Kathy. “He’d save money on shaving cream so he could send a kid to summer camp. The one sacrifice allows you to do the other.”

They also support Lakeside Chautauqua, a special place that’s near and dear to the Kettlewells’ hearts. It’s where they spent their summers and have many fond memories together.

“Lakeside gave us a place to host our children, grandchildren and extended family,” Kathy said. “It’s a safe and free environment that offers religion, education, arts, entertainment and recreation for families to experience. What’s not to like? It has enriched our lives, so we give back. We believe in it.”

Kathy will continue to support causes in the community through their fund to honor Jim’s legacy of helping others, enriching people’s lives and showing others that someone cares.