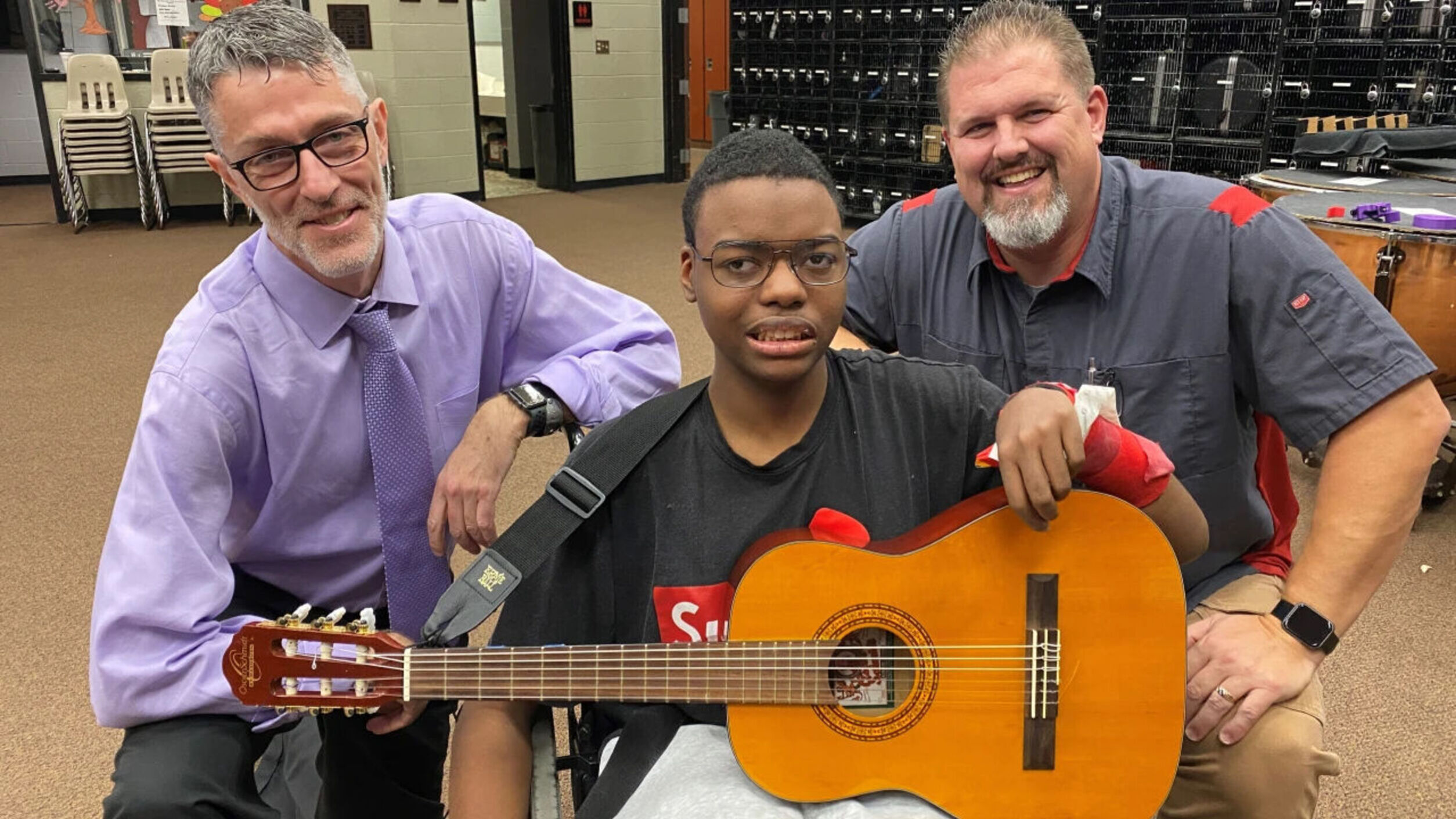 In the past, students in the class have developed projects ranging from prosthetic legs to welding devices, but their recent project was especially memorable because it made a fellow student’s music dreams become a reality.

It was a welcome challenge when guitar teacher George Dean reached out to the class with an unusual request: Could the pre-engineering students use the 3D printer to develop a custom assistive device to help a student with cerebral palsy play the guitar?

Freshman musician Nehemiah Culver had always wanted to play the guitar but hadn’t been able to because of motor challenges that made it difficult for him to hold a guitar pick.  He had previously been a member of the band in middle school and enrolled in the guitar ensemble this school year as a way to stay involved with music.

Dean modified his personal guitar for Culver to use during class.

“I added a strap and changed the nut and saddle of the guitar so it could be played left-handed,” said Dean. “When someone plays the guitar, you have to think about all points of contact. You want him to have forgiveness so that he can vary dynamically to play softer or harder.”

Weaver and his class immediately got to  work looking for a way to help Culver play the guitar. The instructor designed the original prototype, and his pre-engineering students were integral to the team as they worked together to make necessary changes.

Both instructors worked closely with each other, Culver and the pre-engineering students to design an effective assistive device that would provide an enhanced playing experience. Weaver’s daughter, who is pursuing a degree in music therapy at Cleveland State University with a concentration on guitar, also assisted with the project.

“I reached out to her and also to Nehemiah’s physical therapist during the development phase,” said Weaver. “They were both able to provide good feedback from the therapy side.”

After a few trials, some errors and three different prototypes, a final product was given to Culver to use. Thanks to the dedication of the instructors and students, he is now able to play the guitar with accuracy and interacts with  music in ways he couldn’t before. Culver demonstrated his skill in front of the community and used the new device at the guitar ensemble’s holiday concert last month.

“That’s what we as engineers want to do,” said Weaver, “design things that make people’s lives better.”